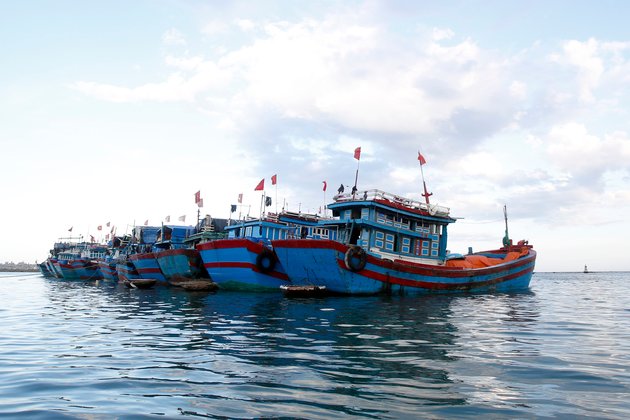 TAIPEI - Vietnam's maritime militia in the South China Sea shows signs of growing over the past decade, say scholars and a research institution in China where the government disputes parts of the waterway with Hanoi.

According to the National Institute for South China Sea Studies, a research organization based in the Chinese province of Hainan, the 12-year-old militia numbers between 46,000 to 70,000 personnel. It says 13 platoons with a combined 3,000 people operate near the sea's contested Paracel Islands and another 10,000 people operate armed fishing boats off southern Vietnam.

Ten years ago the militia "was just starting up", said Yun Sun, East Asia Program senior associate at the Stimson Center in Washington.

"They are trying to expand the maritime militia," said Collin Koh, maritime security research fellow at Nanyang Technological University in Singapore. "The idea is that the existing maritime militia needs to expand its manpower."

China claims about 90% of the 3.5 million-square-kilometer sea that's prized for fisheries and fossil fuel reserves. Vietnam says much of the sea's two biggest island chains, the Paracels and Spratlys, fall within its jurisdiction. China is the most militarily advanced of the six governments that dispute sovereignty over the sea, and it controls the Paracels. China and Vietnam occasionally spar at sea, with deadly encounters reported in 1974 and 1988.

Brunei, Malaysia, the Philippines and Taiwan call all or parts of the South China Sea their own, as well.

Analysts have said China maintains the sea's most obvious maritime militia, a term that describes fishing boats that are armed and fishermen trained to do paramilitary work with support from a coast guard. China's maritime militia was formed in the 1950s and answers directly to the People's Liberation Army, according to the U.S.-based Rand Corp. research organization.

Vietnam's 2019 National Defense White Paper notes the presence of a domestic "militia" and "changes in its organization and equipment" but does not elaborate.

Fishermen form a part-time trained reserve force, Koh said. They act as patrol vessels and can be spotted because they lack visible fishing nets, he said.

Neither officials in Hanoi nor the country's mass media have discussed the scale, whereabouts or oversight of the fishing militia, said Nguyen Thanh Trung, Center for International Studies director at University of Social Sciences and Humanities in Ho Chi Minh City. The government does not want to rile China or appear to be "copying" it, he said.

"They don't want to show that we are copying a leaf out of China's playbook - China is using fishing militia and we use the same kind to counter against China," Nguyen said.

The Vietnamese militia is less "professional" than China's, Koh said.

Vietnam's militia would faze China but not the other maritime claimants, analysts believe.

Philippine and Vietnamese military personnel exchange sporting events on each other's occupied islands, and in June 2019 a Vietnamese boat rescued a capsized Philippine vessel, said Jay Batongbacal, international maritime affairs professor at the University of the Philippines in Quezon City.

"The interactions between Filipinos and Vietnamese fishermen so far have been good," Batongbacal said. "I think they more less have a cordial understanding."

Philippine officials say Chinese fishing fleets have occasionally massed near Manila-controlled islets in the Spratly archipelago over the past four years as intimidation.

Vietnam will probably deploy its militia prudently and try to avoid conflict, Huang said. "What's less predictable is, when they're at sea and in a maritime engagement, whether there would be a misfire situation," he said.