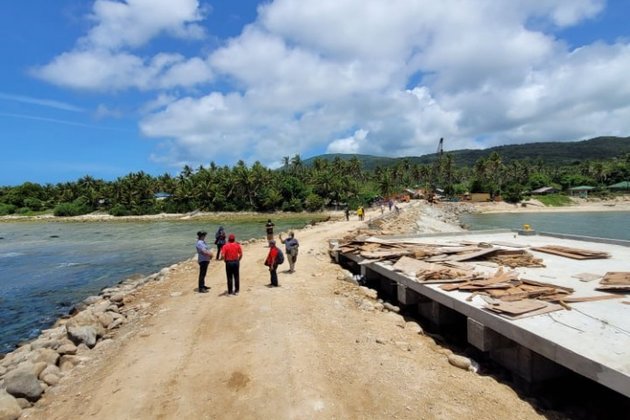 CALAYAN, Cagayan, May 10 (PIA) -- Some major infrastructure projects under the administration's Build-Build-Build program are now underway in the Calayan group of islands.

Mayor Joseph M. Llopis said that the seaport in mainland Calayan, which is a project from the Department Transportation (DOTr), is about to be completed. Another seaport will also be constructed in Camiguin Island.

He also said that the community airport is ready to accept flights. However, they are still waiting for its permit to operate to be issued by the Civil Aviation Authority of the Philippines (CAAP).

Llopis added that there are still other components of the airport to be constructed and the runway will also be expanded soon.

He further said that there are three airline companies that have expressed their interest to undertake commercial flights to the island town as soon as the CAAP will give them the go signal to allow the airlines to operate.

"We felt the government's support since 2017. The Build-Build-Build program of President (Rodrigo) Duterte gave us a dramatic increase in so far as infrastructure development projects in our municipality is concerned," Mayor Llopis said.

He also said that the circumferential road concreting is continuously conducted in the island, which so far improved inter-barangay accessibility in the town.

The mayor also said that there were several farm-to-market roads and tourism accessibility projects established in the town.

To complement the projects from the national government, the Calayan local government unit will acquire one Roll-On-Roll-Off (RORO) vessel with about 1,500 to 2,000 gross tonnage capacity to add to their existing RORO craft.

"We need to improve our logistics because we are very far from the mainland, and so we need to store our needs here in preparation for bad weather conditions," Llopis said.

He also thanked various government agencies and the provincial government of Cagayan, through Governor Manuel Mamba, for bringing major projects and assistance to the island town, despite the accessibility challenges and the pandemic.

He added that the majority of the island dwellers have already access to potable water and electricity, and they continuously reach out to others in order to provide needed services.

Calayanos are mostly dependent on farming and fishing, and the island is one of the major producers of large cattle and coconuts. (JCK/OTB/PIA-Cagayan)