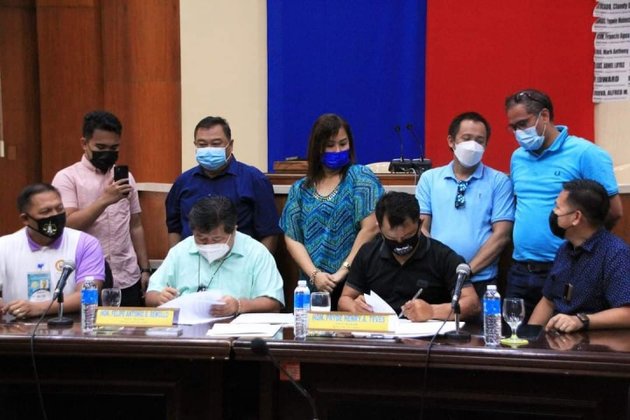 Earlier, Dumaguete closed its 35-year-old open dumpsite in Brgy. Candau-ay after the Department of Environment and Natural Resources (DENR) announced that the operation of open pit dumpsite is now illegal in the country.

However, the central Materials Recovery Facility (MRF) is already operational, wherein the recyclable waste is sorted and disposed by the former scavengers who are now employed by the city government through the Environment and Natural Resources Office.

Based on the agreement, the City of Dumaguete will transport the segregated residual waste to the Bayawan City sanitary landfill at a tipping fee rate of P1,000 per ton.

Remollo thanked Teves for the gesture of support considering that Dumaguete City has the smallest land area among the local government units (LGUs) in the province but with the most number of people going in and out of the city being the center of trade, health, education, and commerce in the province.

"The signing of the MOA is a living proof of an inter-LGU cooperation encouraged by the Local Government Code of 1991," Remollo said.

The arrangement is, however, temporary since Dumaguete City is processing the approval of its own sanitary landfill by the DENR inside the eight-hectare property where the central MRF is also located.

For his part, Teves stressed the need for LGUs to cooperate to solve the present-day problems in the management of solid waste, traffic congestion, and adequate water supply of a growing city.

He said that while Bayawan City has pioneered some major initiatives, there are also best practices and strategies that they want to learn from Dumaguete City particularly in its thriving retirement tourism industry.

Both mayors agreed that LGUs should use their resources to promote mutual benefits for their constituents.